Transporting the public to a more sustainable future: the challenge and opportunity 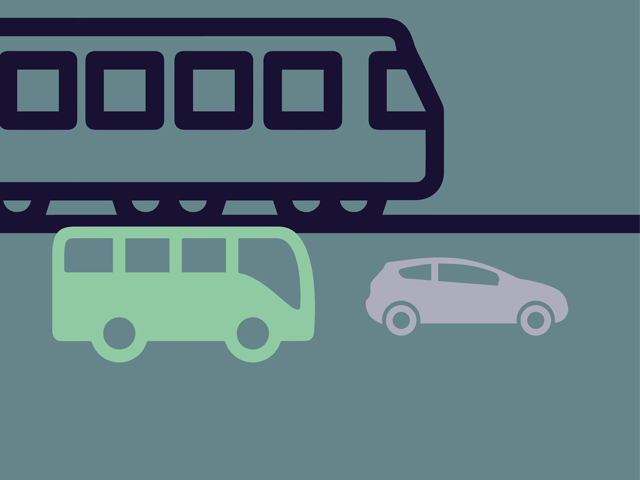 Copper’s latest study has found that there is a perception problem when it comes to public attitudes to urban transport. But the report also indicates that when infrastructure means something to the public and they can see direct, tangible benefits, people are far more willing to support it.

Urbanisation is increasing at an unprecedented rate. Connectivity is not the preserve of the worldwide web – it’s also a demand mirrored in our physical lives as more and more of us flock to big cities in search of better job opportunities and social convenience. By 2050, around 70 per cent of the world’s population will live in cities, a level already surpassed by many developed countries, according to Sarah-Jayne Williams, Director of Mobility at Ford of Europe. But as she says in The City of Tomorrow, that comes with its own challenges: “At the core of this urban challenge is mobility. People must move for work and for leisure, and to access many of the services on which they depend.”

Along with strategic development, installing infrastructure and transport solutions capable of accommodating this ever-growing hub of movers, shakers and doers is crucial to avoid crowding, congestion and a sharp rise in pollution.

But in order to deliver strategic urban transport solutions, public engagement and buy-in is critical.  As our 2019 research uncovers, this may be the biggest challenge of all because without public support, projects which have the potential to deliver major national benefits can be mired in local protests.

There appears to be a disconnect between the reasons for investment in urban transport infrastructure and the perceived benefits of these projects, at both a national and local level.

While people understand the macro-economic argument for investing in national transport infrastructure projects, the public is often not supported in identifying the wider benefits of investment and the future improvement in their quality of life. In fact, of the 1600 people we asked, 63% did not believe that urban transport infrastructure improves their quality of life.

To gain insight into how we might better communicate the benefits of investing in urban transport solutions, we first have to understand people’s needs and priorities. We asked our survey group, which comprised people representing a wide cross-section of ages and backgrounds from across the UK, what their top priority for urban transport was.

At a local level, the broader conceptual benefits, like the economy and the environment, are understandably superseded by considerations like journey times and access to public transport.

What they do value is public transport that delivers direct benefits to the local community: 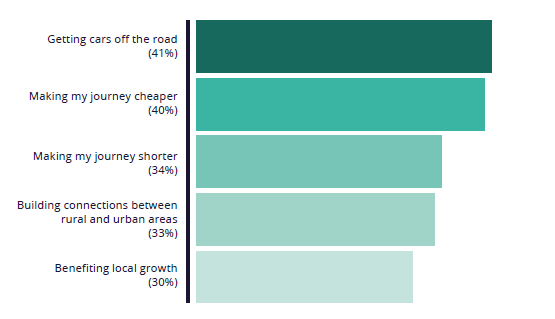 What infrastructure do people want to see in urban areas?

This is at odds with demand for more sustainable modes of transport, improving air quality and getting cars off the road, but it makes sense: what doesn’t exist yet requires more vision. 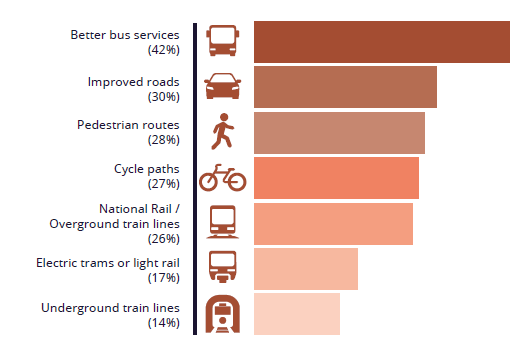 What are people least satisfied with about their current transport architecture?

While sustainability is missing from the public’s list of priorities when it comes to transport, it is conversely the aspect of current urban transport people said they are least satisfied with. This indicates that although people are concerned about wider issues such as the environment, there is a lack of understanding about how these issues can be addressed through infrastructure.

Observations: what does this mean for you?

We can’t assume that people or communities will understand the opportunity or benefits of large scale projects, particularly when those benefits don’t yet exist in their communities. Add to this a long and potentially disruptive construction phase which will take place before these benefits can be enjoyed, and it’s easy to understand why.

Fundamentally, while it is up to project promoters to create a national narrative around the benefits of their schemes, they also need to get better at bringing the future to life for local communities, outlining the opportunity relevant to the issues that matter to people the most.