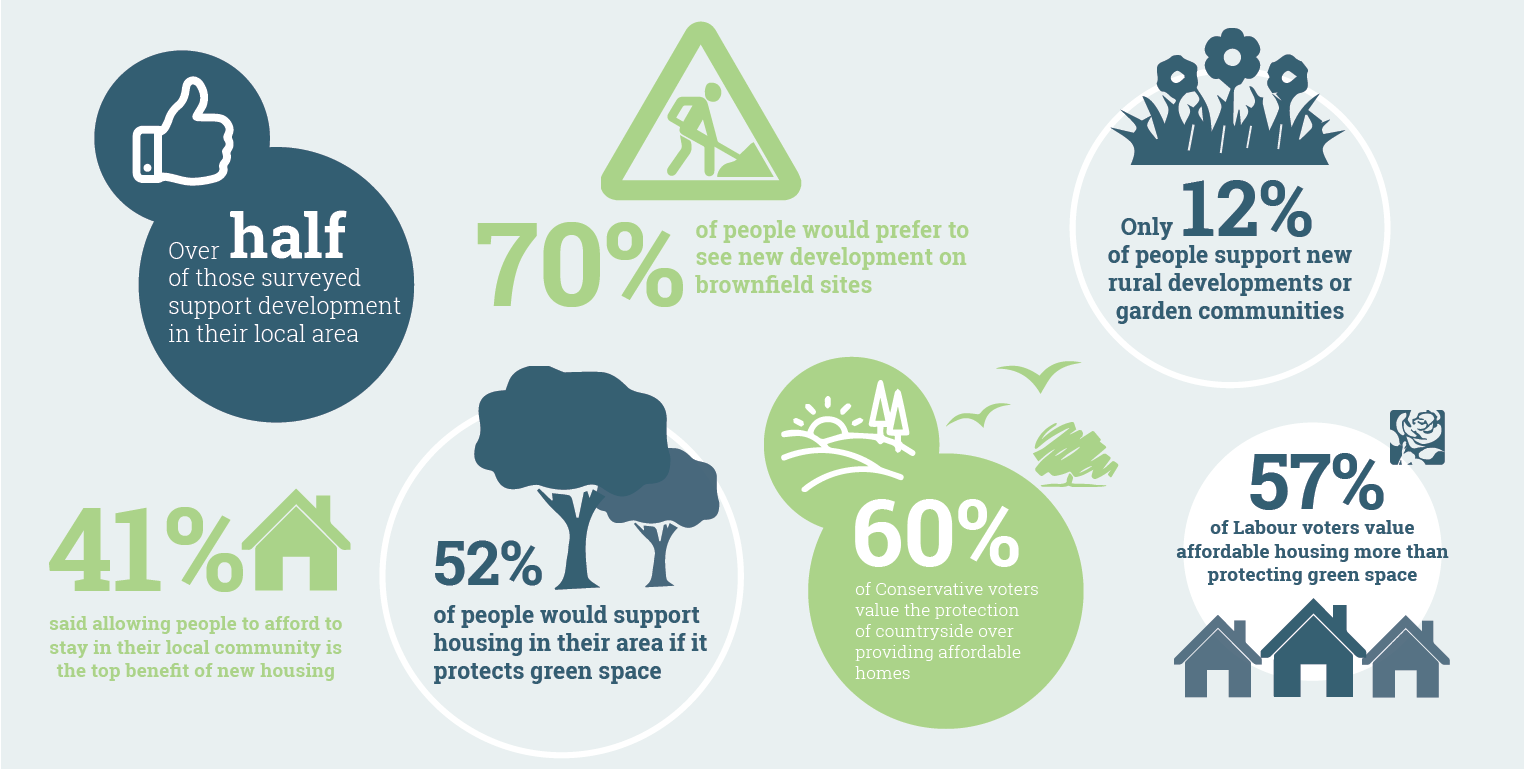 More than half of people in Britain say they would support the building of more housing in their local area (55% support house building compared to 32% who oppose), according to new research released today by Copper Consultancy.

However, this position reverses when development is proposed on green field sites, with only 27% supporting the principle of a new housing development close to their home, and 59% of people in opposition. This disparity is reflected in the fact that 70% of people would prefer to see increased use of urban brownfield sites to provide additional housing, as opposed to 12% who support new rural developments or ‘garden’ communities.

When asked what would make development more acceptable, the protection or enhancement of green space was the most significant factor (52%), with housing affordability (52%) and development of new or improved infrastructure (48%) also ranking highly. People were also asked to choose the main potential benefits of building new housing in their area. The most frequent responses were: the provision of new affordable housing (40%); enabling local people to stay in their local community (41%); and the provision of improved local infrastructure and services (29%).

Discussing the research, Linda Taylor, Vice Chair of Copper Consultancy said: “The ongoing housing shortfall is well understood by people across the UK, but there is no simple solution to how new housing can be delivered and made more acceptable to local communities. The one clear conclusion which can be drawn from our research is that people care deeply about their local communities and the area where they live.  Therefore they are willing to accept new development, but only if it is carefully located and if it offers discernible benefits to local people.”

She added: “Although there is an understandable preference for brownfield development, the public could be willing to accept new greenfield sites, but developers must work harder to convince people that new homes will be developed ‘for local communities’ not just ‘imposed upon them’. They must think creatively about how they can protect and enhance public access to green space, while explaining that new housing and infrastructure will serve existing communities, rather than just new arrivals.”

She concluded: “People are far more willing to accept developments that are carefully planned, well designed and integrated into existing communities, a goal that many developers and local authorities strive to achieve. But this progressive approach isn’t always well communicated to people in the development process or during planning. If we want to encourage more people to accept new housing in their area, and achieve our housing targets, then this is a hurdle that must be overcome.”

The research demonstrated that there is not a significant difference in attitudes towards housing in different British regions, with no great north south divide evident, although support for new housing is strongest in the north and Scotland. However, there is a noticeable split by age range, with older respondents being far less likely to support housing development on greenfield land than younger people, and highlighting an ongoing generational split.