General Election 2019: What the manifestos mean for property

As the general election on 12 December draws closer, we analyse the major parties’ plans for the property sector. The need for a greater supply of housing continues to grow, whilst the emerging focus upon reducing emissions appears likely to shape the future of housing in the UK.

The shortage of housing, and specifically affordable housing, has put the UK’s housing market under increased pressure. Whilst it is clear that the supply of housing must increase, the main parties have made different pledges on how the housing demands can be met.

The Conservatives detailed their commitment to work towards their target of building 300,000 homes a year by the mid-2020s. In order to achieve this goal, they have outlined their initial plans to make planning for small and medium builders easier, whilst supporting modern methods of construction.

The new £10bn Single Housing Infrastructure Fund is intended to deliver the required infrastructure for these new houses. Innovative design and technology will be encouraged in all new homes in order to increase their energy efficiency and reduce the emissions associated with residential properties.

Labour unveiled plans to introduce a new Department for Housing and make Homes England more accountable by placing power in the hands of councils.

The manifesto outlines the intention to build 100,000 council houses and at least 50,000 affordable homes a year through housing associations by 2024. These new builds would adhere to zero carbon standards, whilst millions of existing homes would be upgraded to make them more energy efficient. Labour also laid out plans for a £150bn Social Transformation Fund that would replace, upgrade and expand schools, hospitals, care homes and council houses.

As part of their £130bn infrastructure investment, the Lib Dems emphasised the need for change to the UK’s housing industry. In their manifesto, plans were announced to build 300,000 homes a year by 2024, including 100,000 social homes. Like Labour, the Lib Dems committed to building new homes to zero-carbon standards. In addition, they announced plans to cut fuel bills through a ten-year programme to reduce energy consumption across all UK buildings. 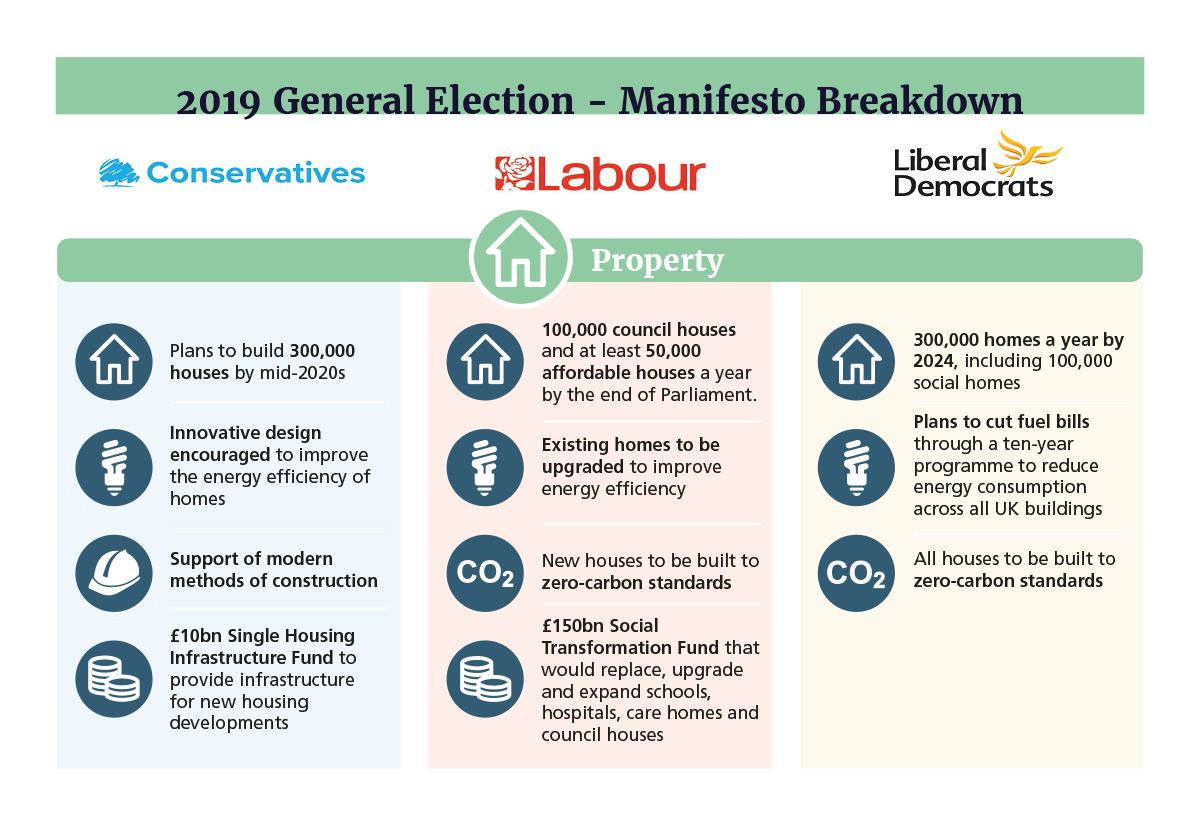 Each of the major parties has identified a current shortage of housing and laid out their plans to increase the supply of properties. Alongside this, the parties have laid out their plans to involve houses in the reduction of emissions in line with the target of net zero emissions by 2050. With uncertainty surrounding the result of the election, the policies within a sector as wide reaching as property could influence any undecided voters.