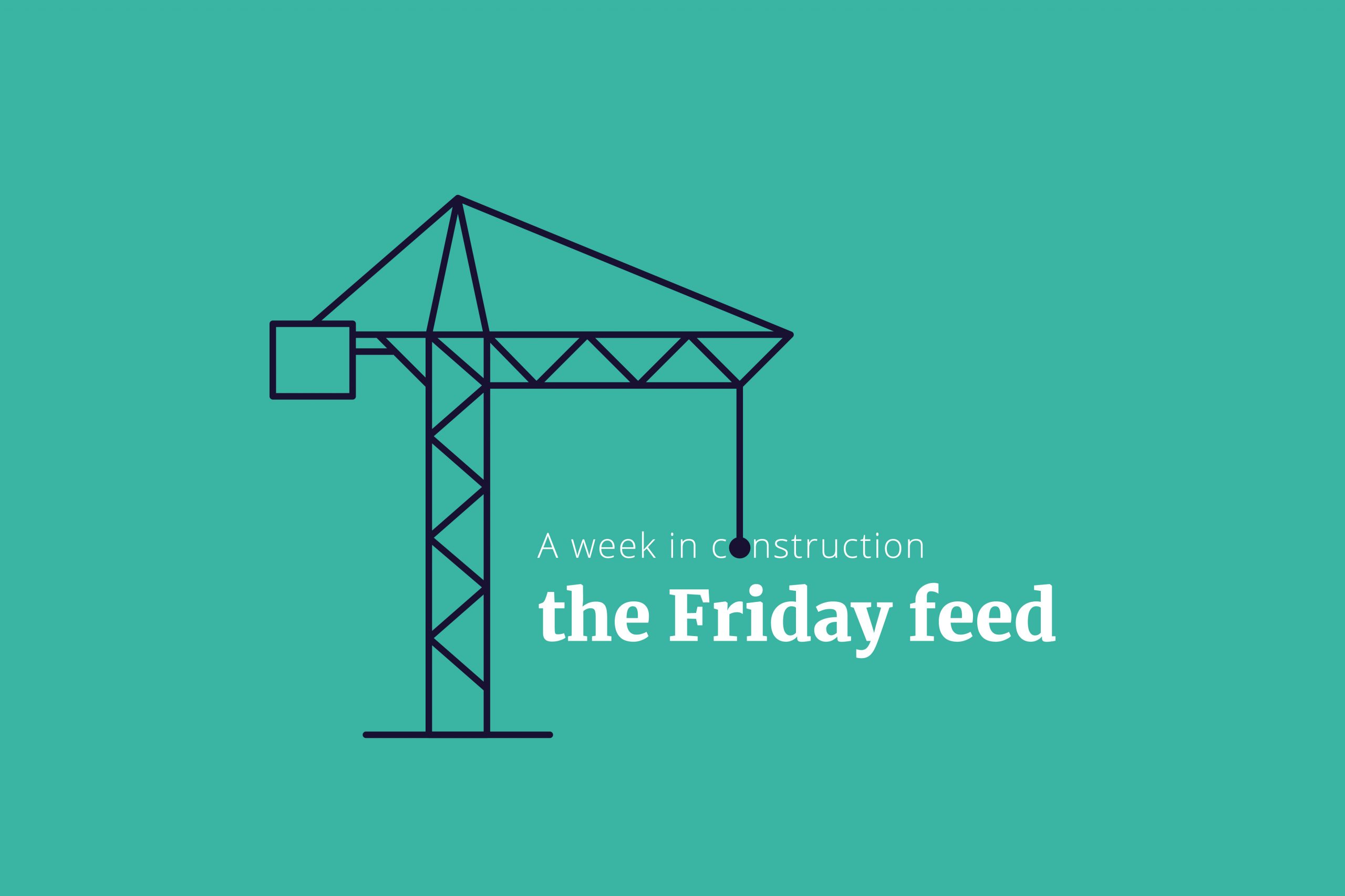 Welcome to the latest edition of our Friday Feed.

This week saw the launch of the £600m new national engineering framework for Scotland which is the first procurement vehicle to deliver public-sector projects that meet net zero standards. Heading down to Westminster, this week also saw the HS2 Crewe to Manchester bill making significant progress as it passes second reading in the House of Commons and several firms winning critical surveying work on the Palace of Westminster restoration and renewal scheme.

In a week dominated by industrial action in the rail industry, HS2 announced that they are seeking a contractor for £30m HS2 jobs at Old Oak Common Station. Progress has also been made with ground engineering specialist Van Elle being appointed to the piling framework for the West of Leeds section of the Transpennine Route Upgrade (TRU) programme and Transport for the South East outlining a method through which it can gather £3.2bn of funding to building an extension of the Elizabeth line that would see it extend to Ebbsfleet and beyond to Gravesend.

On the roads front,  VolkerFitzpatrick has won a £59m contract from Birmingham City Council to strengthen and refurbish the A38 Tame Valley Viaduct and the A47 Blofield to North Burlingham application has been granted development consent by the Secretary of State for Transport, which will involve dualling the A47 between Norwich and Acle Straight.

In energy news, we’ve seen a green light for £300m Teesside offshore wind factory, Kier is trialling a Hydrogen power generator unit on one of its construction sites in the South West, and Costain has become a founding member of a consortium that aims to develop hydrogen infrastructure for shipping and aviation in the West Country.

On the housing front, plans have been submitted for a 52-storey residential skyscraper on the Isle of Dogs in London which has been designed by architect Make, and Scottish house building Springfield has struck a deal to buy rival Mactaggart & Mickel Group for £46m.

Finally, exciting developments with industry leaders this week as Mace appoints Andy Beard as its cost and commercial lead, Sisk has replaced Morgan Sindall on the £1bn Midlands Highway Alliance, and Mace group chairman and chief executive Mark Reynolds has been named as co-chair of the Construction Leader Council.

Documents filed at Companies House by the administrators of House by Urban Splash have revealed the scale of debts owed to the supply chain.

Kier and Wates have signed alliance contracts to construct new houseblocks at six prisons – capable of accommodating more than 2,600 offenders.

VolkerFitzpatrick has won a £59m contract from Birmingham City Council to strengthen and refurbish the A38(M) Tame Valley Viaduct.

Scottish Procurement has fired the starting gun on bidding for a new national civil engineering framework for Scotland.

The first tranche of specialist contractors is set to be confirmed on a new offshore wind factory in Teesside after South Korean steel manufacturer SeAH Wind was granted planning permission for the project yesterday.

Work has accelerated at the Hinkley Point nuclear power station site as constraints from the pandemic ease, with around 8,000 workers now back on site.

Kier and Wates are to deliver prison upgrade works at six separate sites in a government contract worth £500m. The two firms will lead an alliance of hundreds of small businesses in constructing extra houseblocks to accommodate 2,600 people.

Places on £600m civils framework up for grabs – Construction News

The Scottish government has called for interest in a £600m civil engineering framework. The four-year deal will be split into three lots, covering general projects up to £25m, structural schemes up to £25m, and all jobs between £25m and £100m.

VolkerFitzpatrick has won a £59m contract from Birmingham City Council to provide strengthening refurbishment works to the A38(M) Tame Valley Viaduct, which currently carries around 80,000 vehicles a day and links the M6 to the city centre.

Plans have been submitted for a 52-storey residential skyscraper on the Isle of Dogs in London. The site is currently a 6-storey office block which will be demolished to accommodate nearly 460 flats.

Ground engineering specialist Van Elle has been appointed to the piling framework for the West of Leeds section of the Transpennine Route Upgrade (TRU) programme.

A demolition company has been fined just £5,000 after a worker fell 30 feet to his death when part of a pipe bridge platform gave way.

Kier has signed a deal with AFC Energy to trial its new Power Tower clean Hydrogen power generator units on one of its sites.

Materials giants Tarmac and Aggregate Industries are switching to warm mix asphalt (WMA) as standard across their plants.

Network Rail is set to lost £50m on construction work that it cannot carry out due to planned rail strikes, according to its chief executive.

BAM has landed a £24m contract to redevelop Fred Longworth High School in Wigan, Greater Manchester. The contract was won through the Department of Education’s high-value framework.

The hybrid bill to allow the construction of HS2 Phase 2b, taking it from Crewe to Manchester, has passed through its second parliamentary reading, winning the vote by 205 ayes to six noes.

Union leaders were formally invited to consultation talks with Network Rail last night following the breakdown of negotiations with National Union of Rail, Maritime and Transport Workers (RMT) ahead of the start of a three day strike.

United Utilities has published an official contract notice for the upgrade of the 110km Haweswater Aqueduct from Cumbria to Greater Manchester.

Furious Marks and Spencer’s bosses have attacked Michael Gove for “political grandstanding” after the Housing Secretary called-in the retailer’s plans to demolish and rebuild its flagship store.

Specialist engineering and civils contractor J Murphy & Sons is holding a virtual recruitment day next week. The event will highlight career opportunities across the company.

Costain has become a founding member of a ground-breaking consortium that aims to develop hydrogen infrastructure for shipping and aviation in the West Country.

A block of flat that caught fire close to Grenfell Tower in West London was clad with unsafe materials identified by Kier earlier this year and due for removal.

Several firms have won critical surveying work on the mammoth Palace of Westminster restoration scheme. The deals including 23 boreholes drilled to a depth of up to 70m and detailed inspections of 160 rooms.

Operations on the £100bn High Speed 2 project have been disrupted by this week’s rail strikes, forcing material deliveries to be rescheduled.

The amount of concrete needed to create a dive under beneath the A38 for HS2 has been reduced by 80%.

The Department for Transport (DfT) has asked National Highways to explain why it ruled out alternative routes to its Stonehenge Tunnel proposal.

The announcement that the A47 Blofield to North Burlingham application has been granted development consent by the Secretary of State for Transport.

On the banks of the River Thames, there’s all kinds of shenanigans going on0 not to mention recent events on a reservoir in North London.

Gloucestershire County Council is retendering its planned major scheme to upgrade junction 10 of the M5 to the west of Cheltenham.

HS2’s designers have reduced the length of wall structures for the railway at Streethay near Lichfield from 1.6 kilometres to 420 metres meaning 80% less concrete will be needed on the site.

Subcontractors and suppliers wanted across the Midlands – Construction Enquirer

Construction online is bringing its Meet the Buyer programme to Derby next week to highlight work opportunities across the Midlands.

The long-awaited dualling of the A47 Blofield to North Burlingham section has been given the go-ahead.

Self employed labour rates for several key trades have kept up with cost of living rises.

The shortlist for the Inspiring Women in Construction and Engineering Awards has been revealed. In total, 40 entrants across 7 categories are in the running to claim an award.

How a £3.2bn Crossrail extension into Kent could be funded – New Civil Engineer

Transport for the South East (TfSE) has outlined a method through which it can gather £3.2bn of funding to building an extension of the Elizabeth line that would see it extend to Ebbsfleet and beyond to Gravesend.

One Nine Elms jobs has been mothballed because of funding problems for the Chinese developer.

Joint venture procuring for works to public realm at planned West London station and they will deliver structural steelwork, facades and roofing work to the station’s public realm.

Kier Property has formed a joint venture with Housing Growth Partnership to develop residential sites across the UK.

The Midlands Highway Alliance Plus has announced the line-up of firms for its enlarged £1bn medium schemes framework.

Developer Peel has taken control of the East Float housing project on Wirral Waters which was plunged into crisis when modular specialist House by Urban Splash fell into administration last month.

Costain has teamed up with EasyJet, Airbus and other bug names to drive the development of hydrogen infrastructure and technology.

Mace group chairman and chief executive Mark Reynolds has been named as co-chair of the Construction Leader Council (CLC).

Caerphilly County Borough COuncil (CCBC) will apply for £80.6m from the government’s levelling up fund to aid in delivering three regenerative projects.

A former top Facebook executive has joined the board of National Highways to help improve “customer experience”.