General Election 2019: What the manifestos mean for infrastructure

As we approach the upcoming General Election on Thursday 12 December 2019, we examine the Conservative, Labour and Liberal Democrat manifestos and what they mean for the future of the infrastructure sector.

Across all three major parties, there appears to be a dedicated commitment to increased infrastructure spending. Whilst the level of spending varies, there is a consensus on the need for change, mainly for the rail and energy sectors. In addition, the net zero emissions target plays a central role in establishing a sense of direction for the future of infrastructure.

As Sajid Javid stated in their Autumn party conference, the Conservatives plan to implement a £100bn “infrastructure revolution”. Developing the UK’s transport infrastructure will be essential to this. The Conservatives outlined their intention to build Northern Powerhouse Rail, alongside investment in the Midlands Rail Hub and train lines to the South West and East Anglia. While the Conservatives have supported HS2, they have acknowledged the need for a review of the project before extending it. However, the manifesto’s focus on connectivity is not limited to transport. It also includes plans to invest £5bn in introducing gigabit broadband by 2025.

Aside from developing the UK’s railways, the Conservatives announced they will invest £1 billion in establishing a fast-charging network to ensure that rapid electric charging stations are accessible to all. The development of highways is not limited to the adoption of electric cars, as the manifesto also includes plans to invest £28.8bn in strategic and local roads.

Boris Johnson laid out the plans to help the UK reach its current target of net zero emissions by 2050. Investment in research and development will be prioritised in order to facilitate the transition towards net zero emissions. More specifically, the offshore wind industry has been set a target of producing 40GW a year by 2030, whilst plans were outlined to develop carbon capture and storage systems in the UK.

Of the UK’s three major parties, it is Labour that has pledged to spend the most on infrastructure, proposing a £400bn National Investment Fund. Some £250bn of this is intended to start the transition of a ‘Green Transformation Fund’ and drive the UK towards a net-zero carbon energy system within the 2030s. Alongside the changes to how energy is produced, Labour intends to nationalise the supply arms of the ‘Big Six’ energy companies and National Grid.

Labour‘s plans for nationalisation also include bringing the railways into public ownership. The manifesto outlined the party’s desire to deliver Crossrail for the North and HS2 in full to Scotland. On a more local scale, plans were unveiled to introduce a Local Transformation Fund in each English region, which will be used to fund infrastructure projects at a local level.

The manifesto also detailed policies to support the sale of electric vehicles and plans to invest in electric vehicle charging infrastructure, as well as electric community car clubs. Furthering the focus upon increased connectivity, the Labour Party has also pledged to deliver free full-fibre broadband to the whole of the UK by 2030.

The Liberal Democrats (Lib Dems) announced a £130bn investment in infrastructure, outlining their plans to spend more than the Conservatives but still significantly less than Labour. This substantial investment is intended to drive the UK towards the target of net zero emissions by 2045, which is five years earlier than the current target.

To reach this target, the Lib Dems intend to reintroduce the Green Investment Bank, with an initial fund of £5bn. Through this policy, the Lib Dems plan to ensure that 80% of all energy is generated from renewables and all cars are electric by 2030.

The party also highlighted the need for change within the rail industry. The Lib Dems voiced their support of HS2, Northern Powerhouse Rail, East West Rail and Crossrail 2, but have argued for increased accountability within their manifesto. In addition, plans were unveiled to convert the rail networks to either electric or hydrogen-powered systems by 2035, whilst also providing funding for light rail and tram schemes. 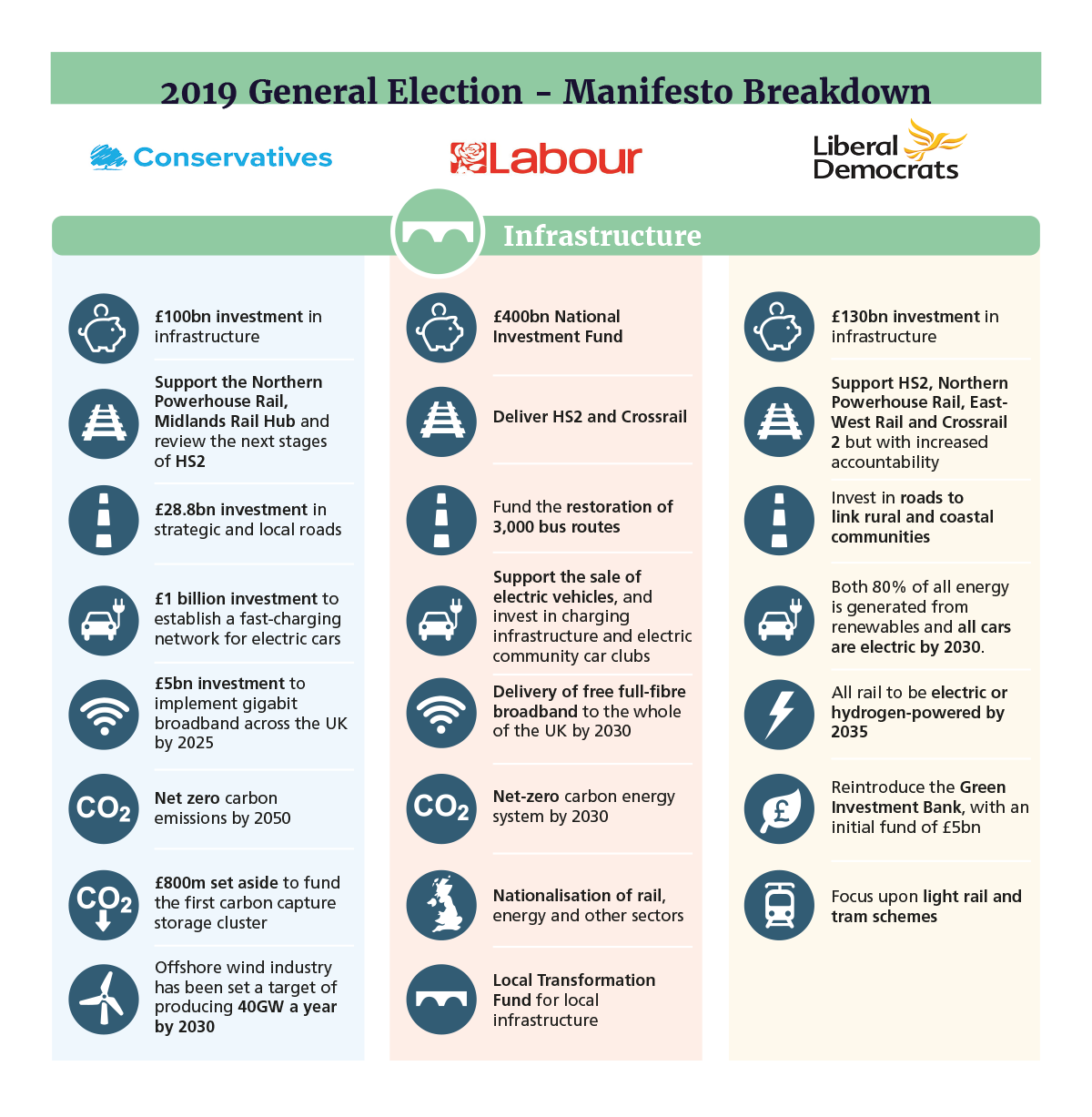 With voter volatility looking likely to be a more significant defining factor in this election than any of those previously, as the election looms heavily over the next few weeks, these manifesto pledges could provide an important indication to uncertain voters of how they should vote on 12 December.