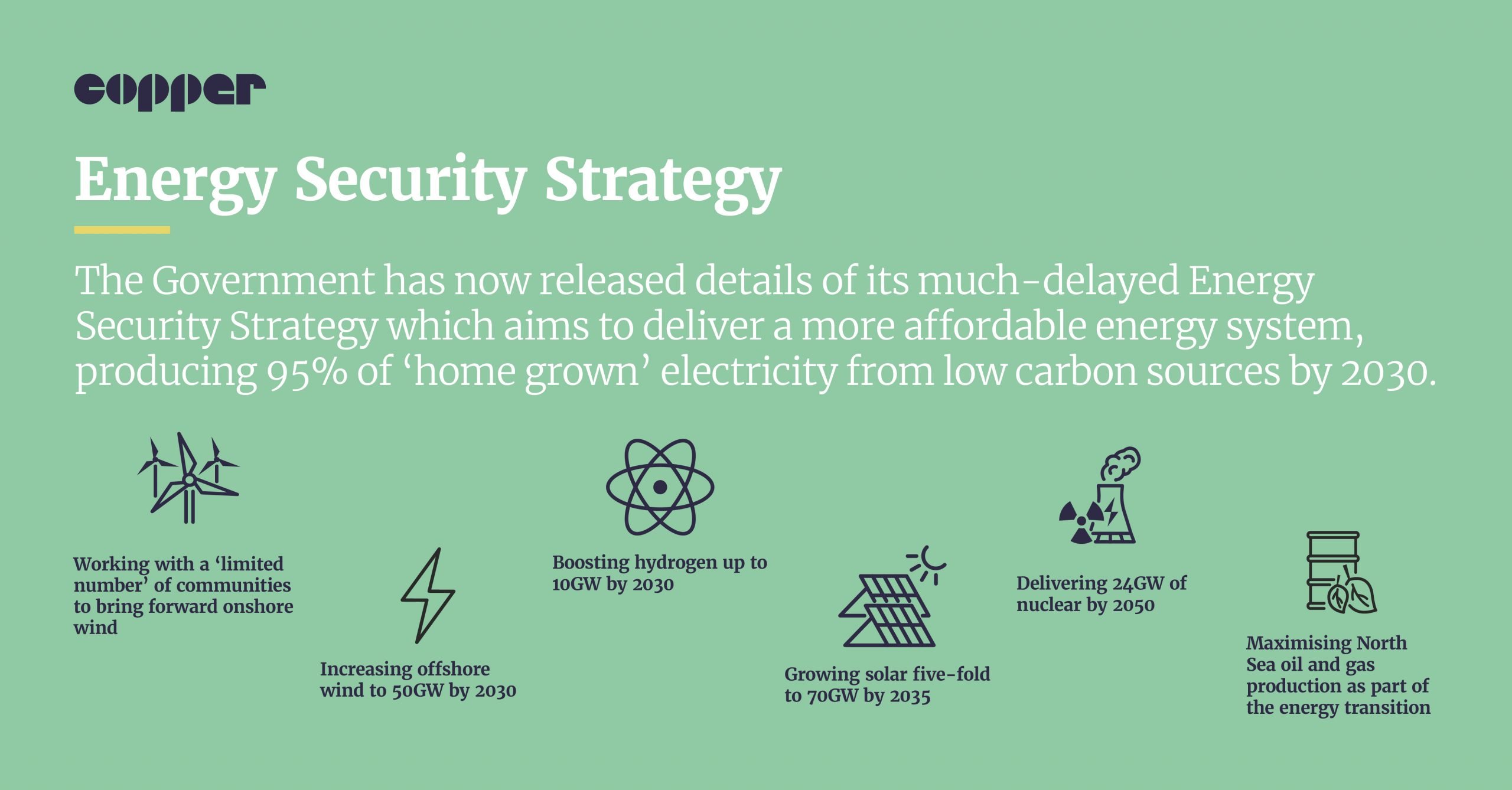 After weeks of wrangling in the Cabinet, the Government has finally released its much-anticipated energy strategy – the British Energy Security Strategy. Copper’s Energy Director, Sam Cranston gives his thoughts on the new plan for Britain’s energy future.

As the contents of the strategy were widely circulated by the media in the weeks leading up to its release, it was well known that nuclear energy and offshore wind would form the backbone of the document. What we were uncertain about, until its publication, was the Government’s position on onshore wind and fracking. And, well, I’m not sure we’re any clearer. For now, we know that onshore wind will be subject to consultation, and there will be an impartial technical review on the safety of fracking.

It is clear that the UK needed an updated approach to energy, especially in light of the war in Ukraine. It is also refreshing to see the Government being bold in its ambitions for building a power supply that, in the words of the Prime Minister, is “made in Britain, for Britain”. However, just like the ten point plan for a green industrial revolution and the Net Zero Strategy, the devil will be in the detail.

The key highlights include:

On offshore wind, the strategy reemphasises Boris Johnson’s 2020 commitment – to turn the UK  into the Saudi Arabia of wind power generation. There’s no doubt that the sector is making huge ground on the original ‘40 by 30’ target, as shown by Vattenfall’s and Scottish Power’s recent success.

The revised target of ‘50 by 30’ has been welcomed by the industry. But achieving this will require a further step-change.

Helpfully, the strategy commits to reducing the consenting period to one year (a 75% reduction) to fast-track new developments. However, there is little detail on the proposed changes to the Planning Act 2008.

Despite having a dedicated section in the document, and an acknowledgement that it is “one of the cheapest forms of renewable power”, the Government’s approach to onshore wind remains vague. Emphasis will likely be on developers to demonstrate local support, which our recent polling shows is strong, suggesting a clear backing for prioritising onshore wind projects. But what constitutes “clear support” – as the strategy puts it – remains unclear.

Reactions from the sector have been critical, with many pointing out that onshore wind could be the quickest way to reach net zero cheaply and securely.

The strategy commits to increasing solar five-fold by 2035, from 14GW to 70GW. Much like offshore wind, the industry has welcomed this ambition. We eagerly await details over the new consultation requirements, as well as amendments to the current planning rules, which will support these new developments.

Nuclear power has been at the heart of the Government’s energy security plans for some time, and the PM is clearly a fan of making Britain a pioneer of nuclear once again, for both large-scale plants and Small Modular Reactors (SMRs). The strategy outlines a number of funding and policy commitments that have been made to accelerate the growth of nuclear, and we’re now waiting to see how the sector can transform the Government’s rhetoric into tangible action.

Our recent polling showed strong public support for tidal power, but the strategy only gives it a single reference (under ‘other technologies’), which is unlikely to offer much reassurance to developers looking to bring forward new projects.

The Government sees the expansion of North Sea oil and gas extraction as critical to fuelling the transition to net zero and reducing bills, whilst removing our reliance on overseas imports. Unsurprisingly, this has been met with fierce opposition from various environmental groups. However, the strategy does commit to ensuring efforts to decarbonise the industry, as well as funding for new carbon capture, utilisation and storage (CCUS) clusters across the country.

Expanding and speeding up the delivery of the UK’s new electricity transmission network didn’t make headlines when the strategy was released. But it is a critical component of the Government’s vision. Without a grid to connect to, 50GW of offshore wind and 70GW of Solar will be useless, so it’s helpful to see the network upgrade as a key component of the new strategy.

For now, we shall wait and see how these commitments play out in reality. In the absence of significant policy reform, one thing is certain about this strategy: community engagement will be critical to its success. Our recent polling shows there is national and local support for new renewable projects, the job now is to build on that support and deliver a system that provides sustainable, reliable and cheap energy for the decades to come.