Behind the scenes at Bristol Airport 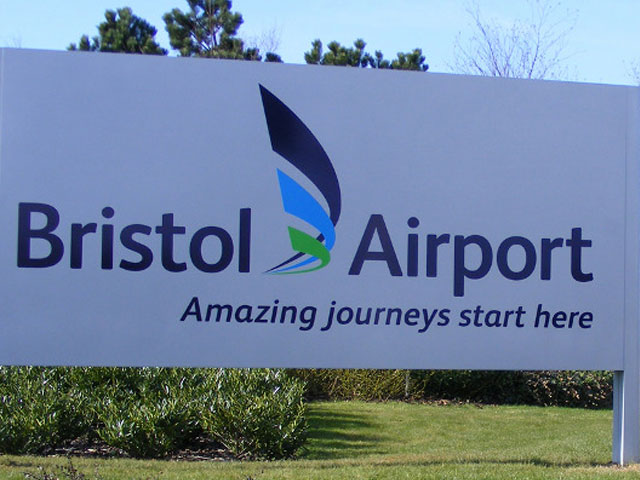 As part of Go Green’s ‘Behind the Scenes’ event series, Copper was given the chance to see what Bristol Airport is doing to improve its sustainability. The Airport has plans to expand considerably over coming years in order to handle its growing passenger numbers (last year the site saw 6.3 million visitors when it was originally only built for a capacity of 2 million). With expansion comes the potential for more impact on the environment, so Bristol Airport has put, and is putting, in place a number of measures to manage and reduce this.

From the vantage point of the old control tower, Melanie King, environment manager at Bristol Airport, explained what they were doing to reduce unnecessary emissions ‘flight side’. This year the airport took delivery of its first electric vehicle, replacing the reliance on petrol and diesel, and they are also tackling one of the biggest sources of ground emissions – planes running engines while at the terminal. Crews need light and power to prepare for the next flight but Bristol has addressed this by providing Fixed Electrical Ground Power, allowing the aircraft’s onboard auxiliary power units to be turned off.

Melanie explained, “Bristol Airport is committed to delivering a sustainable future for aviation and we aspire to be the most sustainable regional airport in the United Kingdom by adopting a proactive approach to environmental management. But we have to collaborate and communicate – there are many different companies working on this site and we all have to work together to achieve this goal.”

One of the largest challenges for the Airport is managing the environment within the terminal building, ensuring it provides everything visitors and staff require but at the same time reducing energy use wherever possible. A member of the Airport’s engineering team explained how major upgrades to the control equipment has brought about significant energy savings through active remote management of almost every element of the terminal’s systems, such as heating/air conditioning, lighting and mechanical elements such as baggage belts. Now they are able to monitor and control all these systems at the touch of a button, ensuring that when they are not required, they are turned down or off, thereby conserving energy.

Another innovation has been the switch from older fluorescent lighting to new LEDs which is currently being rolled out throughout the whole airport. This has saved a lot of electricity but has had unintended consequences. Snow covering the runway lights used to melt from the wasted heat generated by old fashioned light bulbs, something which LEDs don’t suffer from. There’s something delightful (and presumably a lesson to be learnt) in technological advances that mean you have to get the shovels out every time it snows!

Emissions are carefully monitored at the site – the largest source of these is ground traffic travelling to and from the Airport. Improved public transport links (including the ‘poo bus’), installation of electric car charging points and removal of the ‘drop off’ area directly outside the airport (where car engines were left running) are all steps that will help reduce these emissions, which are already safely within the permitted levels.

Bristol Airport is looking after the wildlife on site too – with a number of bat species foraging around the site, the Airport boasts six ‘Bat Hotels’ which enable the bats to stay and prepare for their flight back to their nesting ground once they’ve eaten.

It is clear that a site such as Bristol Airport will never be able to mitigate its impact completely, but what our ‘behind the scenes’ visit showed is that a huge number of sometimes seemingly small steps can be taken to achieve a balance between the Airport’s social function and its environmental impact. As Melanie said, cooperation and communication have to be at the heart of the Airport’s operation with everyone, from staff, to passengers, to bus drivers, playing their part.